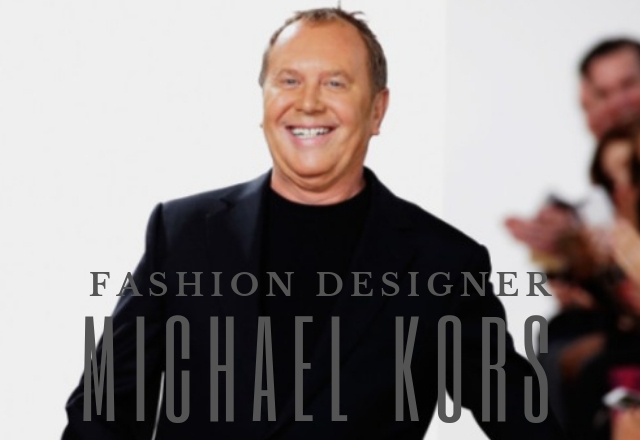 Michael Kors is a world renowned American luxury fashion designer is well known as a judge on Emmy nominated Project Runway.   As a fashion designer, he strived to produce high end ready to wear garments and accessories for both men and women.  Subsequently, the Michael Kors women’s collection launched in 1981 selling at high end department stores Saks Fifth Avenue and Bergdorf Goodman.

Kors developed an empire as a successful fashion designer, based on a sophistication for elegance, that suited his talent.  In Developing new apparel for his line his reputation as a designer grew to new heights expanding his business worldwide.  Kors is also known for designing for celebrities who wore gowns from the Michael Kors custom collection throughout his career.

Michael Kors chief creator of his brand of apparel in women’s, men’s footwear, jewelry accessories, and watches. has become a famous fashion designer with a global reach including 770 lifestyle stores around the world.   Kors was born in 1959 in Long Island New York where he lived for many years and grew up in the suburban home in Maverick New York where he graduated from John F Kennedy High School located in Bellmore New York City.

Early in life, Kors was fortunate to gain exposure to the apparel industry while his mother was working as a model.  As a Toddler, Kors worked as a model appearing in national campaigns for well known products including Lucky Charmes and tissue paper gaining early exposure in commercials.

At the early age of 5, Kors showed an intense interest in a fashion designed is mothers wedding dress for her second marriage. Showcasing a natural talent for design esthetic was early indications of a future fashion designer.  As a teen, Kors began designing clothes and selling them out of his parent’s basement which he named Iron Butterfly continued to work on his collection.

Kors took acting lessons when he was young but stopped when he was 14, changing direction in his career as he decided to focus his attention on becoming a fashion designer. Expanding his reach Kors traveled across the United States for small fashion shows held in private homes referred to as trunk shows.

At the age of  23 Kors convinced fashion editor Anna Wintour of then New York Magazine now the editor of Vogue to view his collection.  At the time his dreams to showcase his work in glamorous Madison Avenue showrooms seemed to be far off in the distance.  Continuing to persevere Kors displayed his collection laid out on his bed in his apartment to be viewed.

Michael Kors enrolled in the Fashion Institute of Technology in 1977 to study fashion design however he decided to drop out after 9 months of study to take a job at Lothar’s a boutique across from Bergdorf Goodman 57th Street in Manhattan. Kors took possession as a salesman and soon become a fashion designer creating merchandise for his first collection while working as visual display head for the store.

Director Dawn Mello Fashion designer at Bergdorf’s discovered Kors and asked him if he would like to show his collection to the buyers of Bergdorf Goodman. Kors launched his Michael Kors label in 1981 at Bergdorf Goodman where he produced a range of products under his signature Michael Kors collection including ready to wear men and women’s accessories, footwear, watches, eyewear including a full line of fragrant products.

Michael Kors has won numerous awards within the fashion industry and has been honored for his work as a fashion designer and philanthropy earning respect from millions of devoted fans. Kors dedicated to his vision of sophisticated chic style has created an empire luxurious lifestyle reaching global proportions.

Kors successfully launched women’s ready to wear collection for the French house Celine turning the fashion house around selling high end accessories was praised for his ready to wear line.  Kors left Celine in October 2003 to focus his attention on his own brand of menswear ready to wear fashion. The Michael Kors line was launched in 2004 including women’s handbags, ready to wear apparel and shoes in conjunction with his original Michael Kors label.

Michael Kors a popular American fashion designer well known as a judge on Emmy nominated Project Runway in 2004 as the first reality fashion show on television. The show premiered on December 1, 2004, became an immediate success among critics and fans who enjoyed his critiques of contestants participating in the Project Runway competition.  In his personal life, Kors married his partner Lance Le Pere on August 16, 2011, in South Hampton New York located in the Hamptons.

In the United States, countless celebrities wear his garments showcasing his iconic style of luxury gowns and dresses. Viola Davis wore a custom Michael Kors collection gown when expecting the Golden Globe Award for best supporting actress in the motion picture for her role as Fences. Michael Kors continues to work as a successful fashion designer and

In 2013 Michale Koors partnered with the United Nations World Food program to help fight hunger worldwide helping to deliver food to children through the WFP’s school meals program. The Watch Hunger Stop campaign has helped deliver over 18 million meals to children in need.