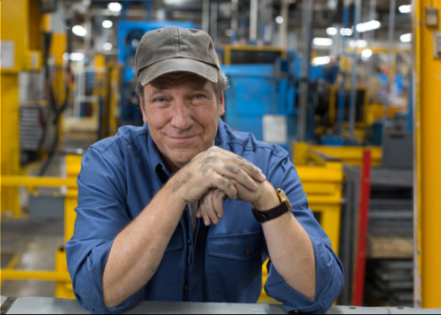 Mike Rowe is commonly known as America’s television host and narrator on CNN series Somebodies Got To Do It, Dirty Jobs, and Discovery Channel series.  As a vivid philanthropist, Rowe created the mikeroweWORKS Foundation providing scholarship programs and financial assistance for qualified applicants.

He spends a significant amount of time at speaking engagements focusing on the profoundly disconnected relationships between work related issues skills, training.  He discusses the challenges faced though obtaining gainful employment and the disfunction between education and real life experience.   Rowe highlights the skills necessary for gainful employment challenging the belief that the only road to success is a 4-year college degree.

As a narrator in hosting programs, he has an extensive background and was originally tapped to be the on-screen host of the Discovery Channel Deadliest Catch a television show about fishing and the bearing sea.

Rowe has narrated programs on the National Geo Graphic series, How The Universe Works, Deadly Catch, Shark Week and has appeared in commercials including the Ford Motor Company along with various personal accomplishments including Returning the Favor and developing the mikeroweWORKS Foundation.

Rowe is currently working a project on Facebook called Returning The Favor that involves finding people who do good deeds for their community and Rowe does something for them in return.

Returning The Favor is a reality web based television series that started on Aug 28, 2017, posted on Facebook Watch. Exicivitve producers of the series include Mike Rowe, Mary Sulivan, and Christopher Spray, produced by Huston Media providing thought proving entertainment.

Creators of the series follow Make Rowe on his travels across the United States as he searches for individuals who are actively giving back to their communities.  The people who are chosen for the program are profiled and surprised with a reveal that enables them to increase projects they are currently working on, passing on good deeds to their cause.

Returning the Favor by Mike Rowe narrator and spokesperson develope the series to help promote people doing charitable work for others giving back to their communities.  Facebook renewed the series in July 2018 for the third season on the networks online social media platform giving viewers video on demand entertainment, available internationally to all users of the social networks worldwide audience.

In November 2017  Returning The Favor was honored alongside with other shows including “Got Your 6” that attempts to eliminate stereotypes that may be damaging to veterans who may be perceived as broken heroes focussing on how they are portrayed in our culture.

Rowe credits the series to his mother as a good source of inspiration for publishing the show on Facebook Watch.  After posting a clip on his Facebook page he quickly realized the potential audience reach of the social media network can provide.

Rowe is perceived as a very engaged creator of the story developing natural ways of communication to his audience to according to Facebook’s vice president of media partnership Nick Gardudin.

On November 27, 2017, renewed the show for 13 episodes and is referred to as one of the heroes shows alongside with Strangers and Ball Of The Family on Facebook Watch.

The mikeroweWORKS Foundation started a campaign profoundly disconnected with the focus pertaining to the absurd belief that a 4-year college degree is the only way to obtain personal and financial success.  Currently, there are a trillion dollars in student loans leaving people in economic distress paying off loans with personal expenses.

On Labor Day 2008 Rowe decided to give something back launching the mikeroweWorks Foundation with a campaign to rejuvenate skills and trade throughout the United States.  Closing the gap between the dysfunctional relationships with actual work-related issues training and skills.

The mikeroweWORKS Foundation focuses on the challenged assumption that a 4-year degree is the only path to success raises awareness about skills needed for the workforce.

In 2013 Rowe spoke to delegates at the 49 Annual Leadership skills conference for SkillsUSA located in Kansas City, Missouri where he addresses a crowd of 15,000 people at Kemper Arena speaking about the importance of working smart and hard to your career.

In the year September 2013 mikeroweWORKS launched the latest initiative Profoundly Disconnected, a website dedicated to promoting the simple truth about work-related issues.  According to Rowe many of the opportunities that exist today require skills, not a diploma.

Mike Rowe CEO of mikeroweWORKS Foundation spends a signifiest amount of time speaking about the correlation between a broken relationship with work the focus on skill gaps for obtaining gainful employment and the belief that the road to success is through a 4-year college degree.

Mike Rowe describes himself as a personal cheerleader for both the white collar employees and blue collar employees hoping to inspire individual initiative of positive enthusiasm across the United States about the economy and work related training topics.   Share this post with friends.

Video Courtesy of  Fox and Friends